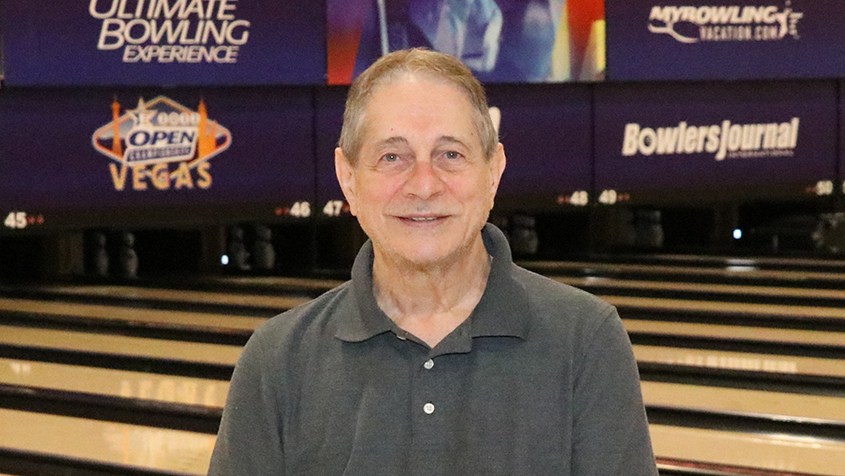 Las Vegas, NV - James Zaharis of Apalachin, New York, has enjoyed some memorable moments during his career at the United States Bowling Congress Open Championships, but through five games this week at the South Point Bowling Plaza, his 2022 tournament campaign was shaping up to be anything but remarkable.

Finally, with persistence and a little trial and error Friday morning, the 73-year-old right-hander was able to find the right ball and the right line to the pocket.

A dozen shots later, Zaharis claimed a special place in the event's record book as the first bowler to roll a 300 game at the 2022 USBC Open Championships, and he nearly became the oldest competitor in tournament history to accomplish the feat.

That record belongs to Detroit's Tony Lindemann, a two-time Open Championships titlist (Regular All-Events and Team All-Events in 1951) and USBC Hall of Famer (1979) who was 74 when he tossed one of the 14 perfect games at the 1994 event in Mobile, Alabama.

Like Lindemann, the newest member of the tournament's 300 Club also reached the milestone during doubles competition.

Zaharis started the day at the South Point Bowling Plaza with games of 161 and 167, before things finally fell into place.

"Typically, I don't score very well at the Open Championships, and I was having some trouble playing different lines and trying different balls," said Zaharis, who has participated in the Open Championships off and on for about five decades. "Finally, I decided to try taking what normally would be my spare ball here and going off the corner with it, and it worked well. There was a lot of trial and error today, and I was able to find the right combination."

While many bowlers use plastic or urethane balls for their spares, it actually was a shiny high-performance ball that got the job done for Zaharis on Friday.

He said the ball works well for him when he's bowling at Ripics Carousel Lanes in Binghamton, New York, or Midway Lanes in Vestal, New York, but it was earmarked for a different purpose this week. Until it turned out to be his secret weapon.

Just as he passed the halfway point of his historic performance, a lucky break helped keep the string of strikes going, but it also helped relax him for the conclusion of the game.

The final three shots of the 300 were as good as any bowler could dream of throwing them, especially on such a grand stage.

"Whenever I've been going for a 300, the seventh frame has been my toughest one, so I guess that was in the back of my head," said Zaharis, who has more than a dozen USBC-certified perfect games. "I just went too fast to the line and pulled it. It was a bad shot, and I got away with one. It did relax me, though."

Zaharis is a lifelong bowler who comes from a bowling family. His father was a locally known action bowler, who rolled a perfect game of his own in 1939 and earned a gold ring to commemorate the milestone.

Since the Open Championships also awards a special ring to anyone who achieves perfection on the championship lanes, he'll keep it with the ring he inherited, and each of his own children will have a special keepsake someday.

"I'm just thrilled that I was able to do it," Zaharis said. "I never imagined, especially the way I was bowling, that I was going to do that."

His ongoing participation in the Open Championships is thanks to some good friends and teammates who continue to include him.

Though his last appearance came in Syracuse, New York, in 2018, he's already planning to be at the 2023 event, which is being held at the famed National Bowling Stadium in Reno, Nevada.

"Even though I bowled awful yesterday, they still supported me and stuck behind me, and they even asked me to go to Reno next year," Zaharis said. "If I didn't throw the 300, they might've taken that back, but I think I get to keep my spot now."

Beyond his perseverance in navigating the challenging oil patterns at the Open Championships, Zaharis has had to overcome some things off the lanes, too.

He has returned from a couple of back surgeries, prostate cancer and a heart valve situation, and he's currently dealing with essential tremors, a hereditary nervous system disorder that causes his hands to shake involuntarily. Luckily, the latter does not affect his bowling, though it makes things like writing a little tougher on some days.

In addition to the on-lane memories this week, Zaharis is making the most of his first trip to the western part of the United States. He and his wife, Peggy, are making a vacation of it.

The two have spent a long week in Las Vegas with their friends and his fellow competitors, and they'll soon be renting a car and heading to California, where they'll explore all The Golden State has to offer and make a special stop at Disneyland.

The 2022 Open Championships kicked off March 12 and will run for 129 consecutive days, concluding July 18. During that time, more than 47,000 bowlers will hit the lanes at South Point looking to add their names to the list Zaharis started Friday.

Already on the all-time list is Zaharis' former teammate, Richard Clark of Johnson City, New York, who rolled the final 300 of the 2018 event in Syracuse during his last game of doubles.

Visit us on Facebook at the official USBC Open Championships page.