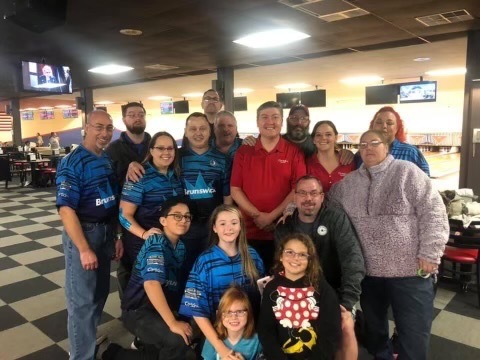 Shafer, centered wearing the Brunswick jersey, said the event would not be possible without the 20-25 people that help plan and put on the event.

Shafer founded the Michelle Shafer Fund for Suicide Prevention and Awareness to honor his late wife, Michelle, who died by suicide in 2014. His largest fundraising event is an annual team tournament at Crystal Lanes in Corning, N.Y.

Shafer has worked extensively to improve accessibility to treatment for those suffering from depression and other mental health illnesses.

The fundraising event began as a youth scholarship tournament. Shafer said education was very important to Michelle, and he followed the lead of Danny Wiseman, Chris Barnes and Parker Bohn III — all former Reyes award recipients — in starting a tournament to help youth players in his area.

During this iteration of the event, Shafer said they raised $38,000 in scholarships. Over time, he felt the initial goal of suicide prevention and awareness was being lost. He pivoted to a scratch team tournament with a greater emphasis on the cause and said the response from the community has been incredible.

“You can raise awareness all you want,” Shafer wrote. “But I prefer to do something about it by helping the true professionals have the means to do so.”

Over the past four years, Shafer said they have raised $7,000, $7,500 and $11,000. This year, a 50-team field and countless donors, including annual donors Sean Rash and Tom Hess, raised $11,500. The proceeds benefit mental health workers and families who have a loved one suffering from mental health illness.

He said when Michelle was ill, the long wait for outpatient care was a big issue.

“You can’t get in to see anybody,” he said. “There's a long waiting list, so the people who are struggling with depression, mental illness and have made an attempt on their own life and survived that attempt, they really have nowhere to go.”

Shafer said he believes the stigma related to someone admitting they need help is slowly going away. "It’s okay to not be okay" is one of the mottos of his event.

“The reason why this award is important isn’t because it recognizes me,” Shafer said. “I want it to recognize the people who help, participate and donate. Anytime you get focus on what you're doing, it raises more awareness for (mental health and suicide prevention) and you can grow that way.”

Reyes, who died in 2012, was an eight-time PBA Regional champion, collegiate All-American and the 18th player in PBA history to bowl a 300 game on national television. Players today still remember his "everlasting smile" fondly.

Shafer, the 19th player in PBA history to bowl a televised 300 game, defeated Reyes in the match before his perfect game. He said Reyes was always very gracious.

Many years ago, Shafer said he was not invited to a PBA doubles event at Six Flags, though he felt he should have been. He said Reyes, who was invited, voluntarily gave his spot to Shafer.

“That just tells you how he was,” Shafer said.

The 988 Suicide and Crisis Lifeline is a hotline for individuals in crisis or for those looking to help someone else. To speak with a trained listener, call 988.

Crisis Text Line is a texting service for emotional crisis support. To speak with a trained listener, text HELLO to 741741. It is free, available 24/7, and confidential.