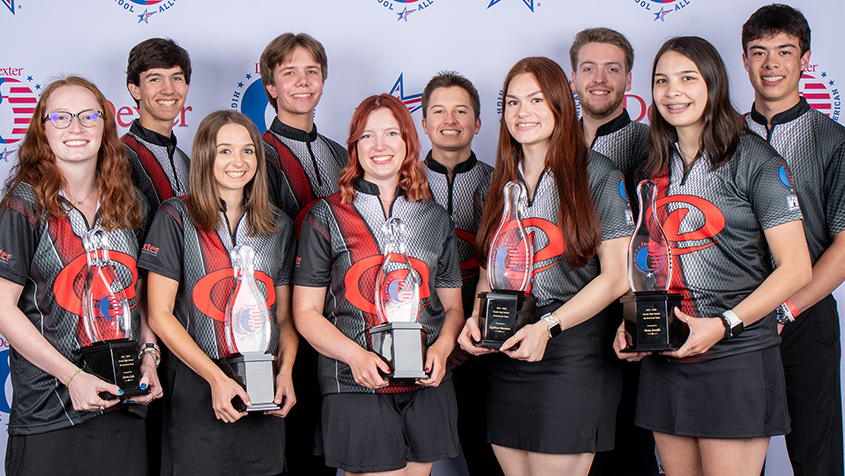 Arlington, Texas – The Dexter High School All-American Team has been announced for the 2021-2022 school year, with Kathryn Bowman, of Peru, New York, and Kyle Neeley of Granville, Ohio, named as captains.

The teams were selected by Dexter Bowling in consultation with the International Bowling Campus Youth Development staff. Each team is comprised of five student-athletes who had to participate on a recognized interscholastic high school bowling team during the 2021-2022 school year.

Applicants were required to have at least a 3.0 GPA (on a 4.0 scale) and submit a resume of their bowling and academic achievements, along with an essay, to be considered for the team. They also were required to provide recommendation letters from their coaches or athletic directors and at least one additional letter of recommendation.

“In reviewing all the applicants, it was apparent that everyone had incredible bowling resumes, transcripts and references,” said Paul Sylvia, Dexter Bowling Vice President. “However, what made this year’s Dexter All-American Team members rise above the field was their overall commitment to advancing not only their bowling, but their dedication to becoming a future well-rounded leader. Dexter is proud to be associated with these amazing student-athletes, and we look forward to following them as they take the next step in both their bowling and academic careers.”

Each team member will receive a $1,000 scholarship. Bowman, the only repeat member from the 2020-2021 team, and Neeley were announced as captains during a dinner Sunday as part of the 2022 Junior Gold Championships in Grand Rapids, Michigan. Both captains will receive an additional $500 scholarship and take home the Bud Clapsaddle Award, named for the former Dexter Bowling vice president who oversaw selection of the first 12 teams.

Hannah Bielawski (Beaver Falls, Pennsylvania) – The senior recorded a 4.2 GPA (weighted) at Blackhawk High School, while taking a variety of Advanced Placement and Honors classes. She was in the top 10% of her class academically and received the Athletic and Academic Excellence Award. Bielawski lettered in three varsity sports (bowling, lacrosse and volleyball) and is a two-time high school section MVP (bowling) during her junior and senior years. She also was named recipient of the Pennsylvania Star of Tomorrow Bowling Scholarship.

Kathryn Bowman (Peru, New York) – The senior held a 4.78 GPA (weighted) and was valedictorian of her class. Bowman earned the John J. Herbert Memorial All-Academic Award, was a member of the National Honor Society and an AP Scholar. Bowman was the first student to achieve a perfect score on the NYS Region Exam in Geometry for Peru Central High School. Bowman received the 2022 USBC Earl Anthony Memorial Scholarship. She owns numerous top-five finishes on the state and local level, and her high school bowling career included being named Champlain Valley Athletic Conference Most Outstanding Female Bowler for three consecutive seasons. She holds conference records for girls high average (211), high series (764) and high game (289). On the national level, she owns a second-place finish in the 2021 Youth Open Championships (doubles) and a 13th-place finish in the 2019 Junior Gold Championships (Girls U15). She earned the Nebraska George Beadle Scholarship and the Husker Heritage Scholarship.

Sierra Calo (Riverview, Florida) – The senior carried a 3.79 GPA at Bell Creek Academy and received the 2019 President’s Education Award (Silver). She was twice named Female Athlete of the Year by her high school and is a two-time Florida High School Athletic Association District 6 All-Events champion. Additionally, Calo has experienced success at the Youth Open Championships, collecting a title in the 2019 Girls U15 Handicap and Scratch Doubles event with partner Hannah Diem. She also finished first in the U15 division of the 2019 Florida Junior Gold Series Tournament and is a two-time champion in the Florida Youth Bowling Series (U18).

Hanna Hale (Hazlet, New Jersey) – The senior held a 4.61 GPA (weighted) at Mater Dei Prep, where she was a member of the National Honor Society and recipient of the Annual Zeb Scholarship for her senior year. During her junior year, she was the recipient of the Saint Michael’s College Book Award for Academic Excellence and Social Conscience. On the lanes, Hale was a four-time Mater Dei Prep Women’s Bowling Player of the Year and four-time team captain. As a senior, Hale recorded a Top-20 finish in the New Jersey State Interscholastic Athletic Association (NJSIAA) Girls Individual Central Sectional Tournament and qualified to bowl in the NJSIAA Tournament of Champions. She placed third individually in both her junior and senior years in the Shore Conference North A Division of Bowling and is a two-time qualifier for the Junior Gold Championships.

Maia Struble (Anchorage, Alaska) – The lone junior among the girls, Struble is carrying a 4.06 GPA (weighted) and is a National Honor Society member at Dimond High School. She is a 2022 Seal of Biliteracy recipient and has been an active volunteer participant in numerous donation drives. Struble is a three-time member of the Anchorage Scholastic Bowling League All-Star Team and a two-time Girls Bowler of the Year. She also held the girls high average (208) and high game (268) for the league in 2022 and helped lead her team to a state championship in 2021. Struble is a three-time winner in the Alaska Pepsi Championships (U10, U12 and U15) and a past Alaska Youth Scholarship Tournament champion.

Jackson McRae (Lebanon, Tennessee) – The senior took multiple Advanced Placement and Honors courses at Lebanon High School on the way to a 4.44 GPA (weighted) and graduated Summa Cum Laude. In 2022, he earned the USBC Earl Anthony Memorial Scholarship, Bowl 4 Life Scholarship and Gift For Life Scholarship. He was a member of the National Honor Society and a Tennessee Scholar. McRae was a three-time first team All-District player, a two-time Team MVP and member of the 2022 Tennessee All Mid-State Bowling Team. He owns first-place finishes in the 2022 Road to the Gold Murfreesboro and the 2021 USBC Youth Pepsi Championship. He finished third in the 2022 Individual State Championships.

Kyle Neeley (Granville, Ohio) – The senior was named captain of this year’s Dexter High School All-American team after recording a 4.21 GPA (unweighted) at Granville High School. Neeley was a 2021 National Merit Finalist and Granville Education Foundation Fall 2020 Grant Winner, in which he helped obtain technology for remote learning throughout the school district. He also was captain of the Granville High School Academic Team and a two-time captain of the bowling team. Neeley was the 2017 Ohio Pepsi State champion, the Licking County Player of the Year in 2021-2022, a two-time first team all-conference selection and a two-time Columbus City Tournament champion.

Adam Pankow (Lonsdale, Minnesota) – The senior logged a 3.97 GPA (weighted) at New Prague High School where he was Student of the Month and a member of the National Honor Society. Panko was captain of the bowling team at New Prague High School that was a two-time conference champion during his tenure. He was named first team All-Conference, Conference Most Outstanding Player and was second team All-State. His team finished in the top eight in the state competition for all four of his years on the team. In addition to bowling, Pankow was active in band, theater, choir and 4-H Science of Agriculture.

Zachary Smullen (Frisco, Texas) – The senior’s curriculum at Wakeland High School featured a majority of advanced and AP-level courses, where he recorded a 4.66 GPA (weighted) and was a member of the National Honor Society. Smullen was Newcomer of the Year and three-time Bowler of the Year in North Texas District B. He finished first in all-events and team and had the high scratch series in the 2021 Texas State USBC Youth Tournament. Smullen owns first-place finishes in the 2022 Youth Scratch Masters Tour, 2022 Ed Calcote Memorial Tournament (where he averaged 261), 2022 Southwest Gold Tour Tournament and 2021 PBA Jr. Southwest Regional Qualifier. He was a four-time qualifier for the All-District Team and bowled anchor on the Dallas North B High School All-District Team that won the 2021 Texas State Championship.