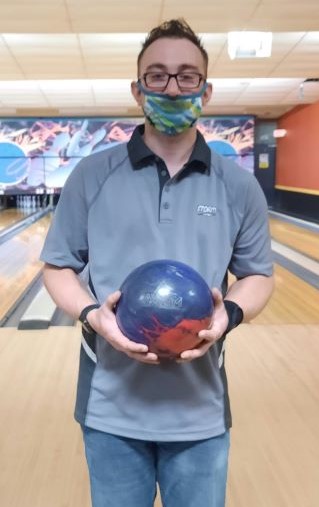 East Greenbush, NY Saturday, March 6 – Rotterdam’s Matt Fazzone rose to the top at the 31st Annual New York State Masters Championship which was held at East Greenbush Bowling Center.  He ended a more than 12-hour day at the lanes as the 2021 Champion of one of New York State USBC’s premier events.

“I have no words, it hasn’t really set in yet,” Fazzone said when asked how it felt to be the 2021 Masters Champion.

Fazzone bowled in the morning squad rolling a 1095 for five games to place sixth, the top 12 bowlers from the squad advanced to the finals. After the second squad, Fazzone fell to seventh overall and received a bye in the first round of the finals. The final was a two-game head-to-head single elimination match with total pinfall deciding the winner.

In round two of the finals, Fazzone defeated 12 seed Rebekah VanScoyk from Kingston 442-361. Next up was second seeded Jim Thomas from Binghamton who fell to Fazzone 401-354. In the semi-final round Fazzone squared off against the six seed Robert Danzy from Menands, knocking him off 474-332.

This set up the final match against the 15 seed Connor LeClair from Ravena. Fazzone set the tone in game one rolling a 185 to LeClair’s 161. Game two Fazzone rolled 229 to LeClair’s 193. This is Fazzone’s first NYS Singles Title, he also is NEBA Champions and had a Huck Finn Title.

“You had to make good shots,” Fazzone commented when asked about the oil pattern which was designed by Doug Dukes at Kegel specifically for this event. “It was speed sensitive and the back ends got tight as the oil carried down. It was very playable.”

In addition to the $2,400 first place check, Fazzone also won a paid entry into the 2022 USBC Masters.

Finishing in second place, LeClair’s route to the finals started in the afternoon squad rolling a 1050 for seventh place in the squad and 15th overall. He defeated 18th seed RJ Martinez from Ballston Spa 525-379. In round two he knocked off fourth seed Robert Wiley from Victor 442-375. Next up was fifth seed Ryan Karabin from Scotia 395-280.

In the semi-finals LeClair squeaked by the top seed Ryan Galli from Johnson City 377-340. LeClair earned $1,200 for his second-place finish.

Check here for the final results from the event.