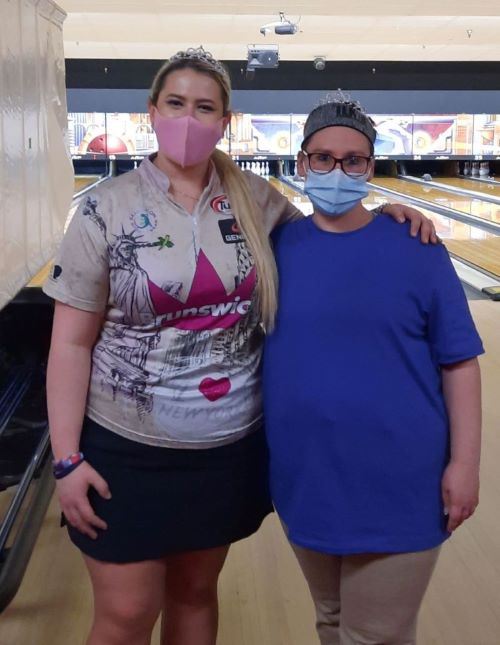 Depew, NY – Liz Kuhlkin of Schenectady successfully defended her title in the Open Division, while Heather Peterson of Baldwinsville won her first title in the Classified Division at the 49th Annual New York State Queens Championships held at AMF Lancaster Lanes in Depew on Saturday, April 17.

79 bowlers came out for the premier event for women in New York State. The day started out with a bang as USBC Hall of Fame Bowler Liz Johnson of Cheektowaga came out of the gates rolling a 300 in game 1. This set the tone for another exciting day on the lanes.

The women were separated in two different division, bowlers who average 200 or more were in the Open Division which had 66 entries, and bowlers who average 199 or lower were in the Classified Division, which had 13 bowlers. The qualifying round consisted of 5 games across 10 lanes, after the qualifying round the field was cut and they bowled head-to-head single elimination matches until 4 bowlers were left. Bowlers competed on custom pattern designed by Kegel (Distance 41 Volume Oil Total 27.225 ml).

The Open Division had 12 bowlers advanced to the match play semi-finals. For game one the top four bowlers received a bye in the first round. Kuhlkin lead the way with 1247 for 5 games. In round one of match play, Marjorie Chetney defeated Jessica Abel 193-189, Shannon Sellens knocked off 13-year-old Eliana Occhino 254-196; Christine Nichols ousted Beckie Ripic 235-189 and Kelly Lesoske 234-180.

The four remaining bowlers were than ranked from high to low based on their average for the day for the step ladder finals. In game one, Nichols defeated Aiezza 225-193, Nichols then rolled past Sellens 236-198 to set up the final match against defending champion Kuhlkin. Kuhlkin continued her hot hand rolling a 278 to Nichols 190 to capture the crown. This is Kuhlkin’s second in a row and 3rd overall Queens Title. Her total pinfall for the day was 1460 for 7 games (248 average). In addition to the $900 First Place Prize, she will also receive a paid entry to the 2021 USBC Queens in Las Vegas next month.

Once again, the four remaining bowlers were ranked from high to low based on their average for the day to advance to the step ladder finals. In match one Conver knocked off Conrad 174-151, she then rolled past Bason 223-158. This set up the final match between Conover and Peterson. The match came down to the 10th frame where Peterson threw a strike on the fill ball to win by one pin 156-155. Peterson’s 7 game total for the day was 1255 (179.2 average) This is Peterson’s first NYS Queens Title. She earned $450 for her accomplishments.

Next year’s event will be at Ripic’s Carousel Lanes in Binghamton on 4/22/22.

Other semi-finalists are listed below: